The CBA is much more than a simple battery voltage tester or a battery load tester. Unlike a simple load tester the CBA will test virtually any type or size of battery, any chemistry, any number of cells up to 55V. For the first time and for a reasonable price, anyone can do scientific tests of their batteries by letting their computer do all the work. (more... About CBA)

West Mountain Radio offers multiple CBA models. The overview table below can help you determine which CBA model suits your needs. To learn more about a specific model, click on the model name within the table. A Detailed CBA Comparison Chart is also available. 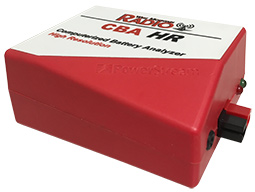 Specifically designed to test and evaluate small cells and batteries - those capable of supplying quite low discharge currents. Such small cells must be evaluated using even greater measurement precision than what is capable with CBA IV model. Designed to precisely test virtually any small size battery, any chemistry or number of cells, from 0.7 to 10 volts. The CBA HR is capable of testing batteries at load currents from 1mA to 1000mA, (10 watt maximum), in increments of 1mA. 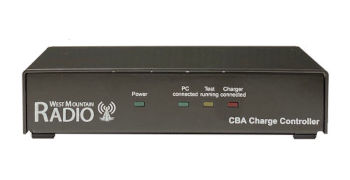 Test at 5 times the power with a CBA amplifier in between a CBA and your battery. 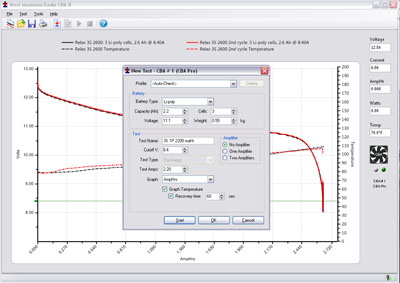 The CBA software is easy and intuitive to use. It provides automatic sensing of the battery cell count and recommends a safe maximum discharge current and minimum safe cutoff voltage for your batteries. The system of software and hardware is designed to protect both the CBA and the batteries that are tested. 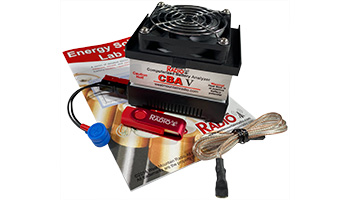 Today's renewable energy solutions rely on batteries. The Energy Science Lab Kit is an educational series of detailed electrical experiments to precisely measure, record, and compare performance of various battery models, capacities, and chemistries. Teachers are able to show students real-world battery performance investigations that are interesting and relevant to all students relying on portable electronic devices as part of their daily lives! Exercises show how to measure battery effectiveness and identify the limitations.

The CBA is capable of higher test rates than other testers: up to 40A or 150W, which ever is higher. It not only tests the total amount of energy stored in a battery (capacity in amp-hours), but it graphically displays and charts voltage versus amp-hours.

Unlike a resistor load, it has an electronic constant current load that is controlled both with software and electronics. Constant power tests may be done with the Extended Software.

Graphs may be displayed, saved and printed. Multiple graphs of the same battery, or multiple batteries, may be compared or overlaid, a very useful feature. Battery tests may be printed on a color or black and white printer. You may also print convenient test labels to be placed directly on your batteries to remember the last time they were tested and how they performed.

The CBA uses a high grade Powerpole® battery connector and comes with a 13 gauge pigtail lead for which adaptors may be made, or purchased as an accessory to connect a battery. A CBA is ruggedly built, compact and has a high performance cooling system with a quiet fan. LED indicators show test status from across a room.

The software supplied with the CBA is easy and intuitive to use. It provides automatic sensing of the battery cell count and recommends a safe maximum discharge current and minimum safe cutoff voltage for your batteries. The system of software and hardware is designed to protect both the CBA and the batteries that are tested.

We think that you will find the CBA a useful and essential tool for anyone that depends on batteries in critical applications. You will learn new and valuable information about your batteries that cannot be determined any other way. Using batteries without a CBA is like driving a car without a gas gauge.